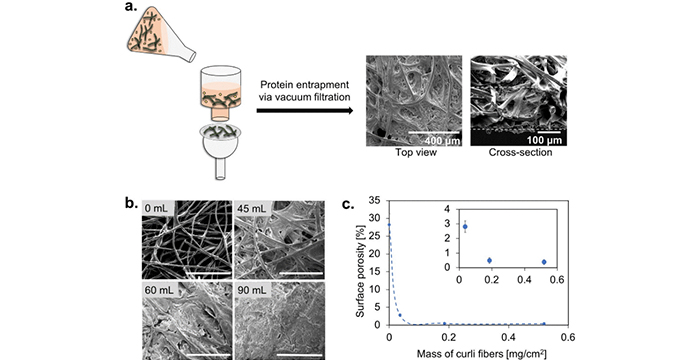 Researchers at McGill University in Canada have fabricated a fluorescent pH-responsive protein-textile composite that has applications in smart wearable textiles. Jessica Owen reports.
The general public is relatively familiar with wearable technology now. These types of products are commonplace in the hospital for monitoring heart rate and ECG, for example, and many people own sports tracking devices such as Fitbits. But despite what is already available on the market, there is still so much technological potential here, and researchers are continually exploring new processes and applications.
Until now, one area that has been focused on less is wearable pH sensors for monitoring skin-related ailments such as dermatitis, acne, and other bacterial and fungal infections.
The pH of healthy skin is slightly acidic due to the presence of barrier that protects against harsh environmental stresses and invasive organisms, and low epidermal pH also promotes vital physiological processes in the skin, including antimicrobial defence, periodic skin differentiation and shedding. Therefore, monitoring changes in epidermal pH is an essential aspect of skincare and dermatological diagnostics.
To better monitor the skin’s pH, researchers at McGill University in Canada have fabricated a wearable protein-based textile composite that can effectively detect pH changes that could be applied to diagnosing skin conditions via sweat monitoring.
“We need two main components to create this composite: a porous fabric and a pH-responsive protein fibre,” says Noémie-Manuelle Dorval Courchesne, assistant professor of Chemical Engineering and McGill University, and corresponding author.
“We have engineered the pH-responsive protein fibres by genetically fusing a fluorescent protein, called pHuji, to a fibrous protein scaffold produced by E coli bacteria called curli fibres.”
Curli fibres are part of the natural biofilms produced by E coli, and they are very resistant to harsh conditions. When they are secreted outside the bacterial cells, they tend to aggregate if they are not anchored to a cell surface. They form aggregates that are tens to hundreds of microns in size, which can be separated from the bacteria via size-based filtration.
“To make the composite, we decided to trap these fibrous aggregates on porous fabrics, thereby loading the pores of the fabrics with protein fibres and trapping the pH-responsive proteins groups in the fabric,” she explains. The pH detection then happens through the pHuji proteins which are fused to the curli fibres. PHuji fluoresces at an alkaline pH, but not at an acidic pH, and its fluorescence can be measured over a range of pHs. The researchers can thus use pHuji to determine whether the pH is alkaline or acidic, or to monitor pH changes based on its fluorescence intensity level.
For the fabric, the team obtained a commercially-relevant type of nonwoven acrylic from the company Myant Inc and the protein fibres already mentioned were integrated into this. The pores of the acrylic are large enough to allow bacteria to pass through, but small enough to trap the curli fibre aggregates. “The initial proof of concept did not take too long,” says Dorval Courchesne.
“My lab already had a vacuum filtration setup in place to isolate curli fibres from bacterial cultures using porous membranes. We decided to adapt our existing process to fill up the pores of textiles, instead of collecting the curli fibres from membranes. Simultaneously, we were working on the engineering of fluorescent pH-responsive protein fibres. Once we obtained the genetic construct, some quick tests rapidly showed that the protein fibres were indeed responding to pH changes. Afterwards, it took one to two years to optimise the processes, fabricate the protein-textile composites, carry out quantitative assays, and evaluate the properties of the sensor.”
Although this process seems quite fiddly, the researchers say that the production of pH-responsive curli fibres could be scaled using bioreactors. The only limitation then depends on the size of the vacuum filtration setup. “If we had a much larger filter, then we could easily fill up the pores of large pieces of fabric with the curli fibres,” she adds. What’s more, the method isn’t overly expensive. The bacterial fermentation is a relatively inexpensive process, and the composite fabrication method used does not require many chemical treatments. If the final application allowed it, the team could even eliminate some steps in the filtration process, depending on the required purity of the protein materials. Currently, the work is just an initial demonstration of the integration of functional proteins in textiles, but Dorval Courchesne thinks that there are many more functionalities that the team could introduce in textiles using engineered proteins. For instance, curli fibres are extremely versatile scaffolds and they could potentially be fused with other responsive proteins to create a range of biosensing textiles against different small molecules.
Moving forward, “we are continuing this research in the field of smart textiles”, says Dorval Courchesne. She adds: “We are exploring other sensing applications and we are also engineering other properties in textiles using biologically-derived materials.”

Groz-Beckert at the Innovate Textile & Apparel