In the scope of their sustainability efforts, the German manufacturers of textile machines, components and accessories have reduced the energy consumption by 28 per cent and the water consumption by 33 per cent for the production of jersey fabric during the last decade. From yarn manufacturing to finished jersey fabric – German technology makes energy bills shrink.
The saving effects applied to the production of one T-shirt per year for each inhabitant of the earth are enormous: If the worldwide produc- tion of cotton T-shirts was made completely on German state-of-the- art technology, the output of the coal power plants in Gaojing Beijing and Guohua Beijing with a total output of 1000 megawatt could be saved every year! 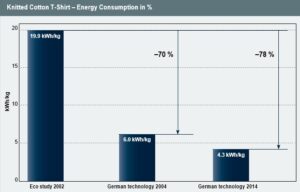 The person, who orders cotton T-shirts today, which have been produced on German latest state-of-the-art textile machinery will become the benefactor of environment. This is because hardly any retailer knows: the jersey fabrics manufactured, dyed and finished on energetically optimized machines of German manufacturers are produced with 28 per cent less energy than with the predecessor technology of ten years ago. If the machinery standard of the 1980s and 1990s is taken as a basis, even 78 per cent less energy is necessary.
Applied to 1,000 T-shirts and using German latest technology, the quantity of energy required for the process steps yarn production, circular knitting, washing, bleaching, dyeing and finishing can be reduced by 2,725 kWh compared to the machinery standard at the end of the twentieth century, which has been analysed in the eco study of 2002. Drivers of the superlight BMW i3 electric car with carbon passenger compartment would be delighted about such a power asset. With a consumption of 12.9 kWh/100 km they could drive about 21,000 km.

Quantity of energy saved means to supersede coal power plants Cotton
T-shirts are basic garment, worn under shirts in the office or as casual clothing. If everyone of the seven billion people on the globe bought one single cotton T-shirt per year, 1.24 million tons of jersey fabric would have to be knitted worldwide. If all T-shirt manufacturers of the world made use of today’s progress in German technology, huge saving potentials could be obtained: Under the theme “World population multi- plied by one T-shirt per year” and “German technology 2014 compared to machinery standard 20 years ago” engineers from Germany have calculated the possible energy saving of 19,354,000 million watts per hour and the water consumption reduced by 127 Mio. m3 and searched for comparisons: In total 14 coal power plants with an average output of 600 MW each could be completely turned off (among them e. g. the four power plants in Beijing – Gaojing, Shijing- shan, Huaneng Gaobeidian and Guohua as well as two in Shanghai – Huaneng Shidongkou 1 and 2) and would not have to be replaced by gas power plants as scheduled for 2016. And they underline an additional advantage: Using German machinery technology for jersey production of the global demand for cotton T-shirts, the annual quantity of water that 2 million inhabitants of Shanghai consume can be saved every year. 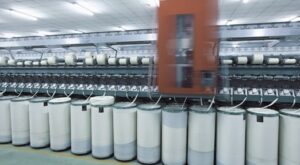 Basis for the calculation of sustainability
Beside the consumption of electrical energy, the energy required for com- pressed air and suction air, thermal energy and water consumption have been taken into consideration for the calculation of sustainability. Has not been taken into consideration the cultivation of cotton,
which represents 38 per cent of the energy consumption and the making-up (covering 2 per cent of the overall energy balance).
The eco study mentioned at the beginning had defined the energy consumption necessary for the production of a T-shirt on the basis of the machinery standard in the 1980s and 1990s in most cases. For the process steps spinning preparation, yarn manufacturing, fabric production and washing, bleaching, dyeing and finishing the investigation lists an energy requirement of 19.9 kWh per kilogram of jersey fabric. This worldwide average is unlikely to have decreased rapidly. A glance at the worldwide installed rotor spinning capacities proves: Nearly 68 per cent of the of the worldwide installed OE-rotor capacities in 2004 had more than 10 years and in 2011 still a good half of them.
As early as 2004 the energy efficiency of German machinery clearly exceeded – as expected – the values stated in the eco study. In the balance sheet ma- chinery of VDMA member companies consumed that time only 6.0 kWh/kg (2014: 4.3 kWh/kg) per kilogram of T-shirt fabric from spinning to finish- ing. 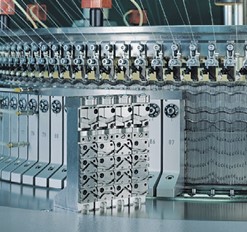 More reference criteria
In order to assure that such a compari- son of sustainability is comparable, all parameters, processes and machinery technology for the manufacture of the jersey fabric had to be defined exactly. Starting point was a medium staple cotton. Yarn manufacture begins at the spinning preparation with fully automatic bale pluckers. The fibre material is opened fully-automatically, blended and cleaned. Carding machines, pre-drawing machines and drawing machines follow downstream. The calculation example is based on a softly twisted yarn with a yarn count of Ne 30, which is produced on a rotary spinning machine with a rotor speed of 150,000 rpm. The yarn produced this way is wound on a package of up to 350 mm diameter within the same process step. The yarn is knitted on singlejersey circular knitting machines with a diameter of 34 inches and a machine gauge of E 28.
With the following finishing process the knitted fabric is dyed as desired (in this example black dyeing with reactive dye stuffs); at the same time its processing properties and its functional characteristics are improved.
Finishing is made on the rope, which is slit before drying.
The dyeing itself comprises the process steps pre-bleaching, dyeing and washing of the T-shirt material. All over the world in most cases so-called rope dyeing machines ( jet dyeing machines) are used. Making-up and drying are further process steps, which the fabric has to pass for becoming a T-shirt. At the end of the finishing process mechanical prewater extraction, tentering and stentering machines are used to dry the fabric.

Leverage effect of saving energy and water in detail
How can these enormous energy savings be generated even with the option to further increase them?
German technology is globally leading with regard to highly efficient productivity and outstanding quality; they guarantee beside a high productivity as the most efficient way to save energy – at the same time maximum process availability. As the automated machines run with long service intervals, energy is saved in reasonable amounts. For the spinning preparation and spinning, German technology guarantees optimum energy efficiency, e.g. with the production of more than 1000 kg/h in the blowroom, more than 150 kg/h in the card and 1000 m/ min delivery speed in the drafting process. 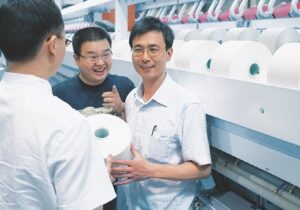 Rotor spinning machines have got the knack
Modern rotor spinning plants are mainly characterised by highly automated machines which enable economic handling of the most different fibre raw materials from virgin cotton over blends and regenerates up to 100 per cent chemical fibres. Production reaches a rotor speed of more than 150,000 rpm and delivery speeds of 300 m/min.
On such machines knit- ting yarns, as they are normally used for T-shirts, can be produced with very high process efficiency. Even raw fibre qualities which could cause a minor spinning stability can be transformed into high quality yarns in a most economical way using the suitable spinning media and spinning parameters. In addition, latest machine generations have a further optimised package builtup, so that perfect dye packages like those only known from ring spun yarn up to date can be produced in one single process step. Throughout the last years the rotor spinning machines have been optimised consequently regarding quality, operator ergonomics, energy consumption and efficiency so that they offer today more and more an alternative to the conventional ring spinning machines. This is mainly due to cut of process steps compared to the ring spinning procedure, the high degree of automation, the use of spinning agents corresponding to the fabric and the integrated quality monitoring. 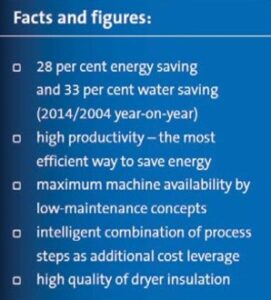 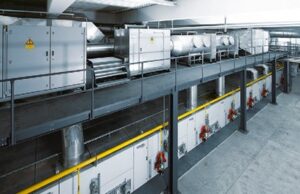 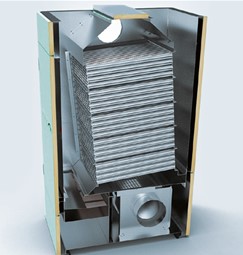 Liquor ratio 1 : 5 (dyeing) and 1 : 6.5 (rinsing)
Textile finishing processes need much water and heating energy. With latest state of the art technology and process management, the finishing process of a cotton T-shirt offers several possibilities to reduce this consumption significantly for both dyeing and drying. One index to describe the water consumption of a discontinuous dyeing machine is the liquor ratio of this machine. The figure describes the ratio of water and the fabric weight by which operation of the machine is possible in theory. A ratio of 1 : 5 means that for filling of the machine with 1 kg of fabric, 5 litres of water are re- quired. The less water is necessary (i.e. the smaller is the liquor ratio) the higher is saving in water and energy since smaller water volumes have to be heated.
In their company brochures some dyeing machinery manufacturers engage a real competition regarding the liquor ratios. It is questionable as to whether process safety and care of material are sufficiently taken into consideration. The German manufacturers of rope dyeing machines use realistic figures: optimum process safety and careful material transport are ensured.

Technology know-how saves energy
With the appropriate technology the process steps finishing and drying can be combined very well. In the socalled wet-in-wet process a softener is applied, using a combined water extraction and application system, which gives the T-shirt an agreeable soft touch and prepares it for makingup with highperformance sewing machines. Subsequent drying in a stentering machine stabilises the edges and enables for setting material width and weight. The German manu- facturers of stenters guarantee maximum energy efficiency, highprecision material guiding and minimum loss of material during drying of cotton single jersey for T-shirts. The excellent machinery quality is characterized e.g. by extremely low maintenance inter- vals for the fabric transport systems and highly efficient machinery insulation to avoid energy losses.

Quality, efficiency and good service – this is what makes BRÜCKNER successful in Turkey