Bioenergy in the political environment 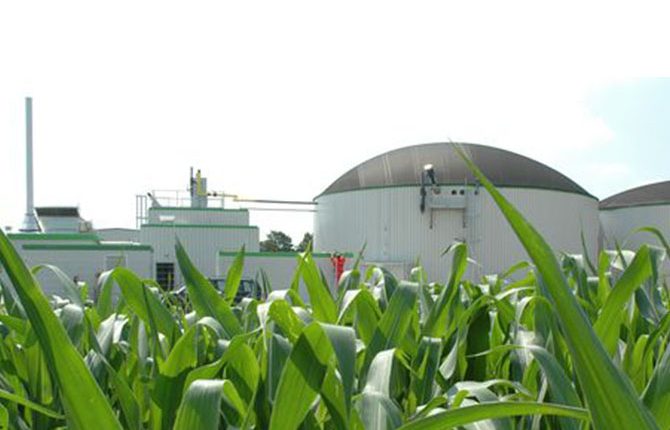 Bioenergy in the coalition agreement

According to the coalition agreement, 65 percent of renewable energies in the electricity sector in Germany are to be reached by 2030 in order to achieve the climate protection targets. The EU has also agreed on the target of achieving a 32 percent share of renewable energies in the total EU energy supply by 2030. The coalition agreement provides for a further development of the existing bioenergy plants in the context of the tender system in order to contribute to the achievement of climate targets in the energy and transport sector. In addition, the recycling of residual materials is to be intensified and the use of flowering plants increased.

Status of power generation from bioenergy

In contrast to volatile wind and solar energy, biomass power plants and biogas plants that are used to generate electricity are base load capable, can be reliably used at any time and their output can be regulated. This makes them a good supplement to renewable energies. The increasing share of renewable energies in the energy mix demands a fuel-based security of supply. Since the electricity sector requires flexible generation, this can be achieved in particular through technologies that use gaseous energy sources. In an increasingly renewable energy system, electricity-based sector coupling is important for the flexibility and stability of electricity supply.

In 2017, power generation from biomass including sewage and landfill gas and the renewable share of municipal waste in Germany was 51.4 TWh (2016: 50.9 TWh). This figure has increased more than tenfold since 2000 (4.7 TWh). Biogas (including biomethane) had the largest share of the total sum in 2017 with 32.5 TWh. Measured as a proportion of total electricity generation from renewable energies, this corresponds to a share of 23.6 percent (8.5 percent of gross electricity consumption). The majority of these electricity quantities are promoted by the Renewable Energy Sources Act (EEG). The energetic use of biomass also takes place outside the EEG, for example by generating electricity from the biogenic waste, the incineration of black liquor or sewage sludge

At the end of 2017, biomass plants with a total installed capacity of around 7.6 GW were installed in Germany. The increase in capacity of biogas and biomethane plants was 260 MW in 2017. Of this total, 28 MW is attributable to new plants and 232 MW to extensions to the installed capacity of existing plants. The development is thus moving towards the continued operation of more efficient and increasingly flexible plants. In the first few years since the EEG came into force in 2000, the increase in capacity was dominated by plants using solid biomass. Since 2005, power generation from biogas has made the largest contribution. The main expansion of biomass plants took place after the EEG amendments in 2004 and 2009. At that time, the bioenergy sector experienced rapid growth, which was slowed down significantly in the years up to 2017. Three amendments to the EEG (2012, 2014, 2017) fell during this period. The development and change in the number of plants is attributable to changes in subsidy structures and increasingly stringent legal requirements.

Industry 4.0 is the future of textile manufacturing…

In the first biomass tender in September 2017, the bids received did not reach the tender volume of 122 MW. Only 24 approvable bids with a volume of around 28 MW were received, which were then accepted. The low number of bids from existing biomass plants that took part in the first tender is largely due to the fact that the end of the previous EEG support is still a few years away for the majority of existing plants and that the existing fixed remuneration is more attractive than the applicable maximum value in the tender. The volume-weighted average award value of the accepted bids was 14.3 ct/kWh and is thus close to the maximum values of 14.88 ct/kWh for new plants and 16.9 ct/kWh for existing plants. Out of the 24 accepted bids, 20 were for existing plants and four for new plants.

In the biomass tenders in September 2018, 79 bids with a bid volume of 77 MW were awarded. This is a significant increase compared with the volume of 28 MW referred to in the previous year. Nevertheless, the volume of bids received was again well below the tender volume of 226 MW. A total of 66 bids for existing plants with a volume of 47 MW were accepted. On the other hand, 13 bids with a bid volume of 29 MW were for new plants. The average value of all bids is 14.73 ct/kWh, which also corresponds to the maximum value for new plants.  The maximum award value for existing plants was 16.73 ct/kWh. Most of the subsidised projects receive the maximum payment permitted by law. The clear undersubscription of the tenders and the achievement of award values close to the maximum values show that the previous tender design must be reconsidered.

For many of the approx. 9,000 biogas plants in Germany, the remuneration under EEG will expire in the coming years. Their operators are currently faced with the question of whether the operation of the plant can also be economically viable and how they can participate in a demand-oriented supply of the markets with heat, electricity and system services.

With the flexibility made possible and financially favoured by the EEG, the course can be set for the future orientation and safeguarding of the location of biogas plant operation a few years before the end of the EEG period. The flexibilization of existing plants makes it possible to better adapt the provision of electricity and heat from biogas plants to the demand on the electricity market and to the supply of fluctuating renewable energies from wind power and solar energy. The flexibility bonus covers a substantial part of the investments in flexibilization and is intended to enable biogas plant operators to tap the earnings potential of the spot market by continuing to operate more efficient and increasingly flexible plants.

Since the beginning of November 2018, the draft bill for the Energy Collection Act has been available, which, among other things, contains important regulations for making biogas plants more flexible. These include setting the flexibility cap at 1,000 MW with a commissioning period of 16 months. In concrete terms, this means that plant operators receive a security regarding the claim to the flexibility premium if the plant is commissioned no later than 16 months after reaching the flexibility cover.

Since 736 MW of the cap had already been used by the end of August 2018, this is likely to trigger increased flexibility investments for flexible feed-in in line with demand. The bringing forward of the annual tender date for biomass plants from September to May is also viewed positively.

The International Energy Agency (IEA) predicts that the expansion of renewable energies will continue, so that they will cover 40 percent of global energy consumption in 2023. Their consumption is growing fastest in the electricity sector and will account for almost one third of total global electricity generation in 2023. Due to weaker political support and additional barriers to the use of renewable energies, use in the transport and heating sectors is growing much more slowly. The IEA assumes that photovoltaics and wind will continue to grow in the electricity sector. Bioenergy currently accounts for around 50 percent of total global renewable energy consumption – as much as water, wind, sun and all other renewables.

At the end of 2016, biomass plants with a total capacity of around 107,000 MW were installed worldwide in the electricity sector. The leading markets include in particular India (3,580 MW) and China (1,820 MW) as well as Brazil (870 MW). In 2016, new biomass plants with a capacity of just under 8,800 MW were installed worldwide to generate electricity.

Europe is also recording significant market growth with fluctuating rates of expansion within the individual member states. The most important European countries currently include France and Great Britain, while Sweden and Germany have recently lost importance. In terms of total installed capacity, Germany, with 9,280 MW at the end of 2015, is well ahead of Sweden (5,154 MW), the UK (5,148 MW), Italy (3,778 MW) and Finland (1,794) in the country ranking within the EU. In total, these five countries account for more than 65 percent of the European biomass output for electricity generation.

Industry 4.0 is the future of textile manufacturing technologies

The Fiber Year 2020 – Deceleration along the textile chain