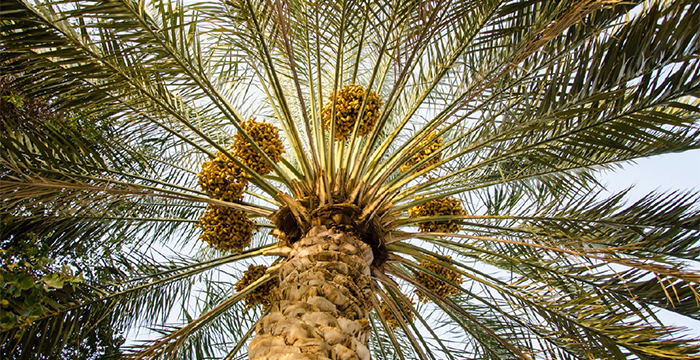 In the 1980s, the shift from natural fibres to manmade was mainly conducted to bridge the gap between the increasing demand for textile fibres and the limited supply of natural ones. Yet the production of these synthetic fibres, and their tendency to not break down in the environment at end of life, has contributed to the textile & apparel industry becoming one of the most polluting in the world.

For the sector to become more sustainable, this shift now needs to be reversed. One way to do this is by exploring more sources of natural fibres and increasing the biodiversity of fibre crops, which is exactly what the inventors of the recently launched technology PalmFil are doing.

“There are more than 140 million date palms around the world, mostly concentrated in the Middle East and North Africa, generating more than 4.8 million tons of by-product each year from pruning, which is regarded as agricultural waste. These by-products could otherwise be transformed into 1.3 million tons of natural textile fibres per year, ranking it the third [most abundant natural fibre] after cotton and jute.”

Not only is there significant potential with regards to scale and availability, but the people behind PalmFil have discovered that the fibres can be used to make several types of textiles, with many different applications. For example, the versatility of the fibre means that it can be made into long fibre tows, chopped fibres, spun yarns, nonwoven mats, woven fabrics, unidirectional tapes, and pre-impregnated, co-mingled and finely milled fibres.

What’s more, the features and characteristics of PalmFil, such as its high tensile strength, durability and lightweight, make it an ‘excellent’ sustainable material base for a wide spectrum of industries. These range from natural reinforcements for composites in automotive and sporting goods, plaster reinforcements in construction, burlap sacks for packaging, ropes, non-wood paper and other consumer products.

“I would say that the automotive industry in particular should be interested in PalmFil,” Midani explains. “Nowadays, all modern cars are using natural fibre composites for internal door panels, trunk liners and parcel shelves, and our natural fibre is lightweight, which provides fuel economy, and it has high thermal and vibration damping and acoustical insulation.” 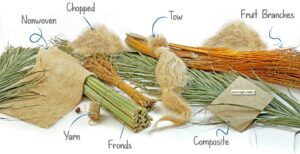 FROM PRUNING TO PRODUCT

So, how does the date palm by-product become a textile? What’s the process? Well, it all starts by collecting the raw material. The palm growers prune the plants throughout the year as a service to the plant itself, and then those stalks are collected and usually taken to the outskirts of the farm in preparation for burning. The plan for PalmFil is to intercept this waste and process it into textile.

At this stage, it is interesting to note that by intercepting this ‘agricultural waste’, many other negative consequences are eliminated too. First, when plants are burned, they release carbon dioxide into the atmosphere. By not burning these plants, CO2 emissions are reduced, helping to mitigate global warming and therefore climate change. Secondly, burning date palm waste is one of the main causes of fire accidents in the region, especially in Egypt. So, by cancelling this practice, it should help to reduce the number of these catastrophic events.

Once the date palm by-product has been collected, the next stage in the process is to extract the fibres. PalmFil is based on a proprietary technology for extracting long, pure fibres from the date palm such as the frond and fruit stalks. The process delignifies and fibrillates the vascular bundles and eliminates the hollow centres without causing any damage of breakage to the fibrils.

“One of our biggest achievements so far is eliminating the hollow content within the tube structure; this is what makes the fibre very rigid and brittle,” Midani explains. “So, once we eliminated the hollow centre, we were able to process it. We actually did a full-scale spinning trial in a spinning mill in Egypt.” 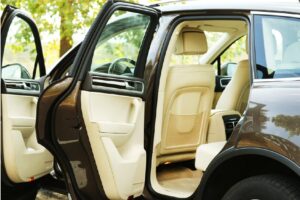 Intense Applications from Procurement Committees Who…

PalmFil could be used to make composites for the automotive industry

From here, the next steps are determined based on the type of textile and application. The fibres can be spun into yarns to make woven or knitted fabrics, or they can be chopped to a length suitable for the nonwoven processing system. PalmFil can be airlaid or carded and then bonded using either needlepunching techniques or adhesives.

Interestingly, the extraction technology could also be applied to by-products of other palm species such as oil palm, sugar palm and doum palm, as well as other agriculture by-products such as broomcorn. 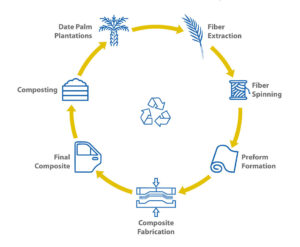 As already mentioned, one of the main drivers behind developing PalmFil is how environmentally sustainable the fibre is. It contributes to the circular economy following a closed loop cycle, it is obtained from renewable resources, and it does not cause deforestation or compete with food production. It is also 100% biodegradable and compostable and is considered a native cellulose, which means it is different to regenerated cellulose that has issues with solvent recovery.

Moreover, the date palm is well suited to the inevitable effects of climate change. For example, it is tolerant to water scarcity, desertification, and global warming. In fact, countries such as Australia and South Africa are now trying to domesticate the plant to bolster their own food and nutrition security.

But it is not just what PalmFil can offer the environment that is worth noting, there is also an opportunity here to build a new industry and support the social sustainable development of rural communities. In the past, whole villages used to specialise in making products like crates from date palm frond stalks. They would prune, remove the leaflets, prepare the fronds, and make traditional crafts. Everyone in the village was involved in the business, but now that is no longer the case because of the modern lifestyle and widespread use of synthetic materials.

“It’s no longer viable to make a chair from plant stalks when it only takes a few seconds to make it by injection moulding, for example,” says Midani.

“But that value chain still exists, at least in Egypt. And the date palm plant itself is a big part of the cultural heritage of the Middle East. I mean, there is no wonder that the biggest manmade island built in the United Arab Emirates is in the shape of a palm tree. So, by creating PalmFil we could create decent jobs for people based on their local agricultural resources and heritage.”

Midani says that he would like to work with local governments or larger developmental organisations to build the industry. He says that there have been examples in the past where help has been given to regions to utilise local resources, such as coconut fibre or sisal, and now they have turned into thriving industries. 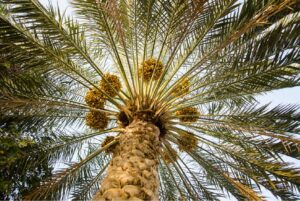 There are more than 140 million date palms around the world

Midani also explains that there are various options in terms of building the supply chain. It could be localised to have small fibre extraction units, or large central units for mass production. He says: “It would depend on who would be interested in further commercialising this with us.”

That brings us to what happens next for PalmFil. The team has come a long way since the initial concept was thought of by Midani back when he was a PhD student at the College of Textiles at North Carolina State University. Now, the team comprises five Egyptian innovators with more than 50 years of combined experience in fibre science, textile technology and composites engineering. So far, the team has self-funded the project, but now that they have proved the concept, they are seeking partners and sponsors to take this to the next level, to scale up the technology and eventually commercialise it.

“We decided to go on this journey and support our own research from our own funding until we prove the concept, until we reached some sort of industrial form of the fibre,” Midani explains.

“We have completed the full characterisation of the fibre and have benchmarked it against other well-known vegetable fibres and now we are ready to tell the world that PalmFil is here.”

The lightest electromagnetic shielding material in the world

Intense Applications from Procurement Committees Who Want to Attend ITM 2022

At The End of 4 Years, World Textile Technology Leaders, To Meet at ITM Exhibition…