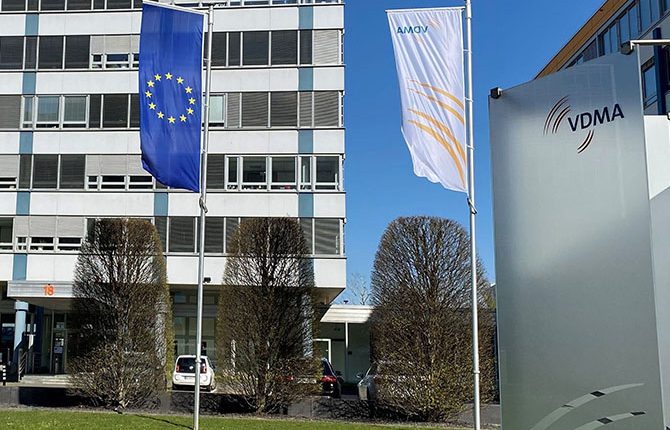 The industry meeting was marked by internationalization and digitization.

This year’s VDMA TFL industry meeting took place on 14 and 15 November in Berlin. For many years, the trade association has been committed to Europeanisation and this year, too, further European members have joined the ranks. “Only together as a European industry can we form an antithesis to the current global framework conditions and remain competitive,” said Elgar Straub, Managing Director of the TFL trade association. The consequences of the trade dispute between the USA and China and the unclear Brexit situation are causing great uncertainty and unrest in the markets. The industry is also feeling this, and strong European cohesion is the necessary response to the current political and economic situation. The importance of Europe was also taken up and discussed in the course of the workshop on “New EU Commission, new political priorities – what does this mean for our industry” during the industry meeting.

Everyone is talking about digitization, but what changes does it bring to society and businesses? Under the motto “Brave New World”, the topic was taken up and various aspects of digitization were discussed. The workshop “Mission possible – step by step towards digitization” dealt with what digitization can look like in a company. Daniel Jung also took up the importance of digitization and called for more courage in digital learning and explained what learning with digital media could and should look like in the future. This is because companies are also facing new times in employee training as a result of new learning. Daniel Jung is one of the most successful German Youtuber in the education sector and helps pupils to understand math.

Frank Rieger, speaker of the Chaos Computer Club, explained what a digitalized world we live in and what dangers exist.

In his China lecture, Sebastian Heilmann explained that digitization brings with it new business models and markets, but also new possibilities for state control. As Professor of Chinese Politics and Economics at the University of Trier and one of China’s best-known experts, he spoke about China’s growing global power, new digital control systems and the implications for European companies. European companies urgently need to deal with the introduction of the “Corporate Social Credit System” in China. This is because it is a new type of Big Data-based regulatory system that involves foreign companies without exception and requires far-reaching adjustments.

In the ensuing discussion, it was agreed that there must be a clear message from the politicians so that fair and free competition can continue to be guaranteed.

Industry meeting with board election

The new board of directors of the trade association was elected for the next four years at the industry meeting. Günther Veit, Managing Director of Veit GmbH, has been re-elected as Chairman, as has Klaus Freese, Deputy Chairman and Managing Director of DESMA Schuhmaschinen GmbH.

The VDMA represents more than 3200 companies in the medium-sized mechanical and plant engineering sector. With 1.35 million employees in Germany and a turnover of 232.5 billion euros (2018), the sector is the largest industrial employer and one of the leading German branches of industry overall.

Truetzschler TD 10 – The quality filter in the spinning mill